Catenian Mass for our Catholic Schools

A special Mass of thanksgiving was said for the brilliant school staff who have been bravely working throughout the pandemic. The Mass was celebrated at St Chad’s Cathedral, Birmingham, at 12.15 on Monday 6 July by Mgr Timothy Menezes, the Dean of St Chad’s. Mgr Tim has kindly agreed that the details of the Mass and his homily may be used by the Province and National Catenian publications.

This website does not usually carry advertisements but Katie Churn, daughter of Brother Bob Churn of Wolverhampton Circle will donate 10% of sales generated here to the Catenian Bursary Fund. Katy sells her hand-drawn animal prints and posters from her Etsy Shop KathrynChurnDesigns Just type Catenian in the note alongside each item.

Stourbridge Circle’s 600th meeting on Wednesday, 11 March took place not at its usual venue but at the impressively appointed Himley Hall in Dudley. There were visitors aplenty and the VIP guest was Bishop David McGough. Unusually for such an occasion, the dress was informal (and none the worse for that). A good meal was enjoyed by all, as were the speeches (not least because they did not go on too long! 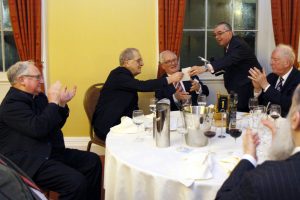 Sunday, 29 March at Hagley Catholic High School, Brake Lane, Off Station Road, Hagley, Nr.Stourbridge, DY8 2XL
The competition starts at 2.30 pm.  Arrivals from 1.00 pm at the School Main Reception.
Entrance is free.
Families and everyone welcome.
Looking forward to a happy event where we encourage our students to be leaders in the future.
« Older Entries