Is this taking CATENA to extremes?

During a recent holiday to New Zealand I came across a rather large chain at the bottom of the South Island which immediately put me in mind of our Organisation. Is this taking “Catena” to extremes?

Pictured are members of Malvern Circle, wives, friends and families puzzling over the questions in this year’s quiz. The identification of the County flags of England in particular resulted in a few head scratching. 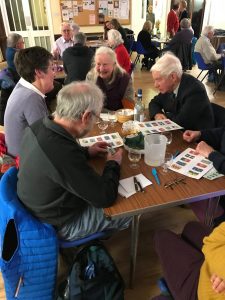 This year the evening, which included a grand raffle, raised some £300 for the President’s charity – the RNLI. Whilst Malvern is far from the sea, the President, Jeremy Kearns, is a keen yachtsman and values their services.

The Guild of St. Stephen

The motto of the guild of St Stephen is “CUI SERVIRE REGNARE EST” -To serve is to reign” and this has been the way of life of Peter Armstrong, Vice President of Malvern Circle who was recently awarded the Guild of St Stephen’s gold medal for 50 years’ service to God and the Church as an altar server. This is the highest award of the Guild for long service.The Guild motto is printed on the front of the medal and on the back is the title of the Guild “SANCTI STEPHANI ARCHISOLDALITAS” – Archconfraternity of St Stephen. The Greek letters Chi and Rho in the centre are the first letters of “Christ”.

Peter says:  “This is the medal for serving on the altar for over fifty years. I have served all over the world in my career in the armed forces, Australia, Cyprus, West Germany and the UK and retired with the rank of Major. It has been a privilege and a pleasure to assist the clergy by serving on the altar over the years and I shall continue to do so at St Joseph’s Church in Malvern.”

Peter is pictured front-row on the right.

Malvern Catenians enjoyed a tasty night out at a local Indian restaurant with VIP representation in the form of Provincial President Paul Clancy and wife Angela (pictured). Paul and Angela have become regulars at our “Indian nights” 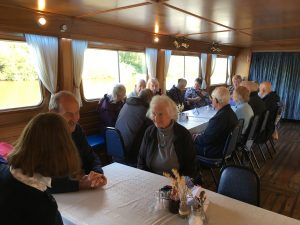 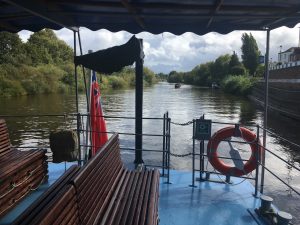