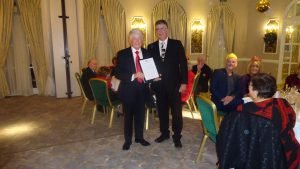 At Sutton Coldfield’s December meeting which was the occasion of the Circle’s Christmas Party there was early Christmas cheer for two Sutton Coldfield brothers: Liam Tomlinson and Alf Dineen, who received their 40 year membership scrolls presented by Brother Provincial President Paul Clancy. Brother Paul gave a brief history of both Brothers’ contribution to the Circle over the years. Both had served as President of the Circle. A most enjoyable evening was held in the true Christmas spirit with £325 being raised for Brother President Steve Broom’s charity, The Lisieux Trust.